Debbie Johnson
W. Melbourne, FL, United States
Debbie Johnson is a Florida watercolor artist. She teaches classes and workshops and is represented by galleries in Florida and Michigan.

For I know the plans I have for you,” declares the LORD, “plans to prosper you and not to harm you, plans to give you hope and a future. 12 Then you will call on me and come and pray to me, and I will listen to you. 13 You will seek me and find me when you seek me with all your heart. 14 I will be found by you,” declares the LORD, “and will bring you back from captivity.
Jeremiah 29:11-14 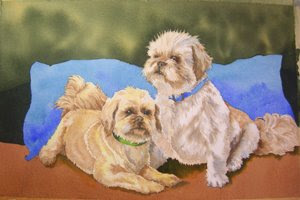 Scooter and Riley seemed to be floating a bit too much for me so I used the mixture that I just added to the background to create a shadow under the dogs.

I wet the area first, applying water beyond the point that I knew I wanted the shadow to be. Then I used a number 10 round brush and applied a strong pigment into the water, along the very edge of the dog and the brown couch (or whatever it is they are sitting on).

The water softened the edges. I kept the board tipped so that the strongest color stayed at the dark shadowed edges of the dog's bodies, and the water flowed into the pigment, rather that allowing the pigment to flow into the water. 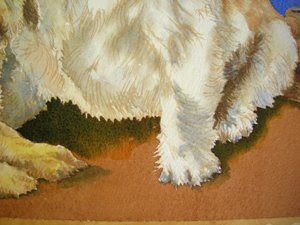 Be sure that when you create the shadow areas under the dogs that the shadow falls on the opposite side of the light source. My light source is on the upper left, so my shadows all had to fall on the lower right.
Posted by Debbie Johnson at 10:00 AM

Email ThisBlogThis!Share to TwitterShare to FacebookShare to Pinterest
Labels: dark values in watercolor, how to paint a dog, painting a pet, painting shadows, watercolor lesson